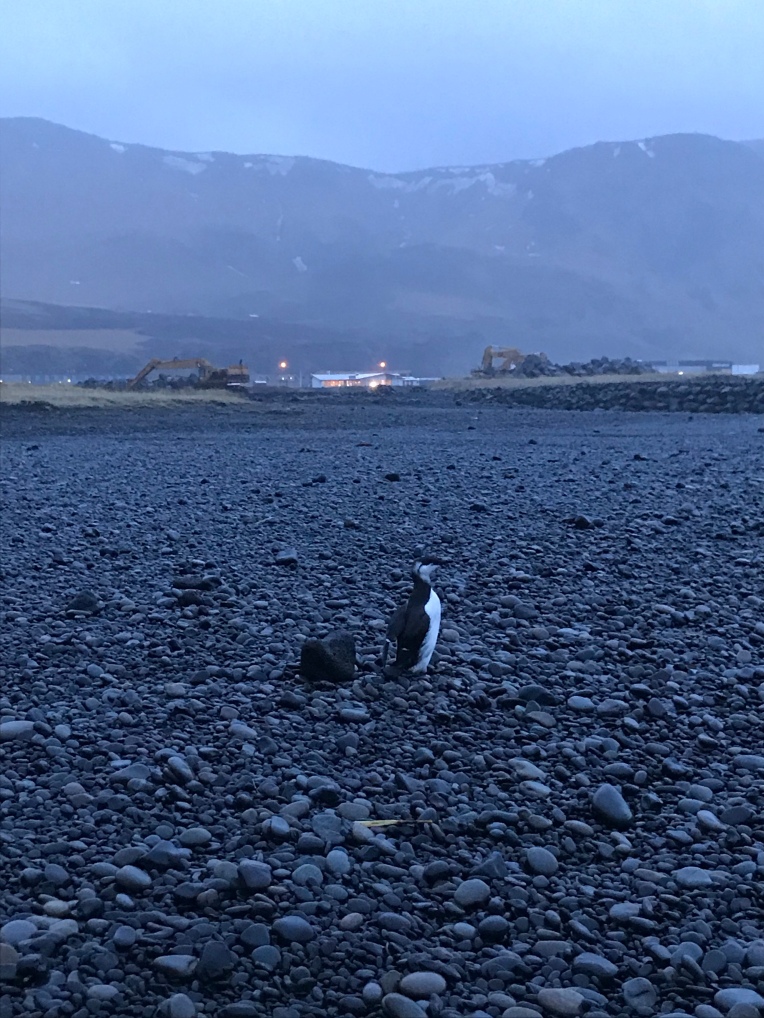 Miss Ella loves crispy chicken. She leaves it on her plate till last to eat. My mum used to do the same with beef. I don’t understand it me. I take meat or leave it. But, I’m all for the pleasure, satisfaction. Straight away. No delayed gratification.

This explains why, on this retreat, after your self-made breakfast, we start in with the paints preparing backgrounds in our special visual journals. I like to use Pink Pig Pads, because the paper is extra thick, is robust and takes many a coat of paint, ink and glue. So I’ve got an A4 or even a square version of this journal. You bring along your own special journal. One that you’ve been stashing away for a special time or reason. Well this is that special time. Just make sure the pages can take all your creations.

We begin with paints, thick juicy colourful paints, and throughout this session we add images and text, intuitively. Working around the theme ‘Light’, we fill up our pages, working with specially prepared prompts and words for the occasion.

After lunch, we’re out and about. And remember the habit of saving the best till last! Not on this trip. We drive south, towards Vik and the black sand beaches. We stand within the roar of the Atlantic Ocean and feel the chill of the water upon our toes. We’re brave on this retreat, so we strip off, down to our cossies and our full bodies are on. Can you feel the power? Can you feel the thrill? We walk around the rocks to the sea stacks and the caves, soaking up the energy of this magical place.

On the way back we stop off at a number of waterfalls along the route. We walk the cliffs to the top, to the source. We walk behind the falls and feel the fresh spray of water. We are happy to be alive.

There will be free time and down time before dinner, prepared with locally sourced foods by Sarah Spaeth. Come and find out more about Sarah here. After we have time to share our a-ha moments of the day. What are our takeaways?

Still light in the day? Yes of course. This is the time of the midnight sun. Time to walk through the village, down to the shore and watch the sunset. 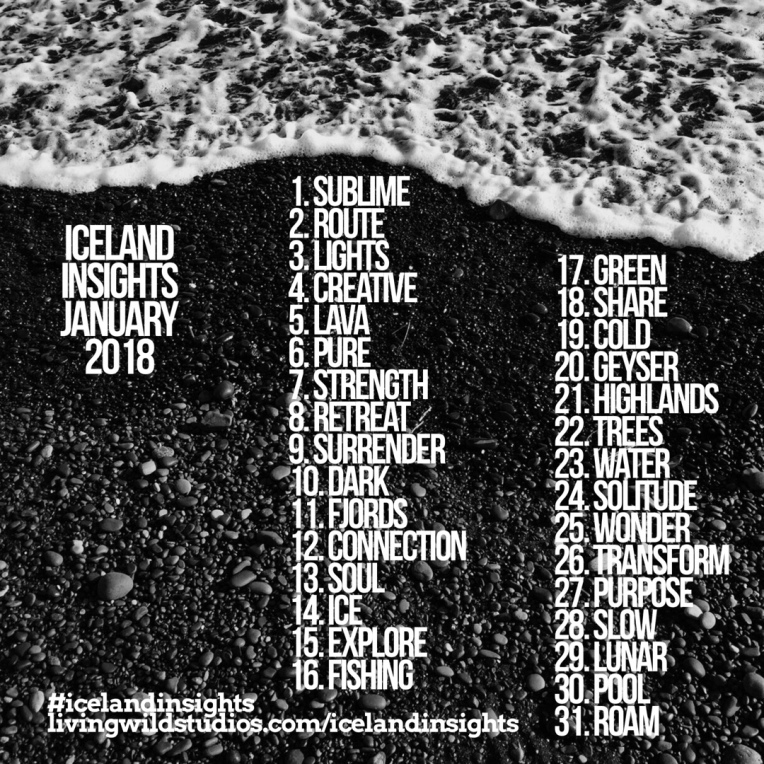 I’ve been thinking of 2018. I’ve been making plans. The New Year will see me visiting Iceland again for a few days. I’m hoping to catch a glimpse of the Northern Lights. While on retreat in March in Pingeryi, I briefly got to witness some pale ivory lights by down the sea shore. Their movement was magical and sublime. I’m getting ready for more.

In preparation for the creative retreat planned for June, I’ve revisiting in January to complete the final touches also. As a means of getting me in the mood over Christmas, I’ve been creating an Iceland Oracle deck of cards through a course from Tara Leaver. These cards are linked in with #icelandinsights; a photo/ journal prompt challenge I’m running during the month of January.

I’ll be posting images and text each day during January 2018 on IG, Facebook, Twitter and here. And you are more than welcome to join me. Use the #icelandinsights and we’ll be able to find each other. 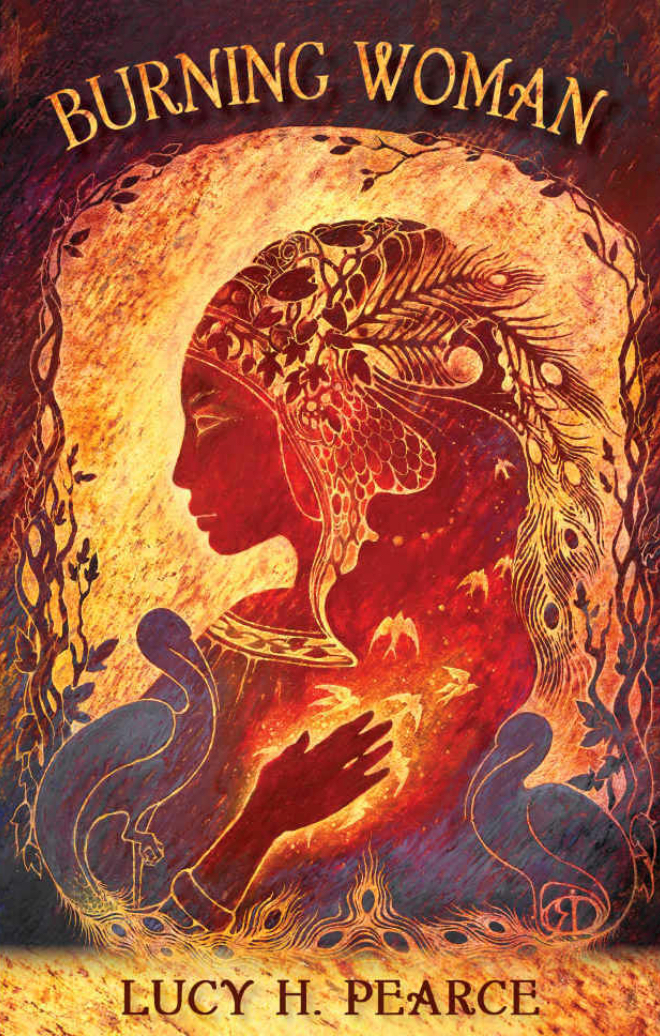 This year I attempted to make a concerted effort to read more books. I felt that I was missing out on rich and varied worlds and ideas by not reading enough. I started off well but I think things went off the boil mid-year, when things in my family life got a bit hectic and harrowing.

I’m trying to pick things up now moving into 2018. To choose just one book as the best for the year is something I cannot do. Also you usually just remember the last few books you’ve read as they are the most recent. To think back over the year, if you haven’t been keeping track is difficult to do anyway. Note to self: keep a record of what I read next year!!!

So I choose Burning Woman by Lucy H. Pearce on the premise that this is one of the books I have kept returning to over the year as it is so packed with juicy truths that resonate with me deeply. This is kind of like a handbook for claiming our power as women internally and externally. I definitely claim the title of a burning woman. #decemberreflections2017

I’m getting ready for the off again. Remember my time in residence on a canal boat with idlewomen? I facilitated a visual journaling workshop for women while there which was really inspiring. Well off the back of that, I’ve been invited back as a guest speaker/ presenter at their informal conference for women in Lancashire next week.

Shifting Loyalties is a gathering of women. Establishing in 2016 in collaboration with Silvia Federici in 2016,
for a week we’ll be living together near Pendle, a place known for its persecution of women as witches in the 1600s, utilising the space to have critical conversations and self-organising against society’s treatment and representation of women. This is an opportunity to share stories and experiences at the same time as becoming empowered as a sisterhood to make change, internally and externally.

All week I’ll be sharing my visual journaling practices through workshops and a drop-in room hopefully inspiring and encouraging other women to explore and adopt this creative practice for self-care and self-awareness.

I’m pulling together my resources and materials, gathering journal prompts that I feel will be accessible as well as beneficial for us to dive deep within safely and effectively when I realise that I could be a witch.

Witch. I really haven’t considered it before but I’ve got witchy tendencies. I believe in the Divine Goddess. I worship the natural world; Great Mother Earth. I observe and honour the Wheel of the Year, sensitive to the seasons and rituals as we cycle through the year. This year, during Samhain, I spent time at my altar conversing with my dead ancestors.  I look upon this path I’m on as magical, empowering me to grow, change and heal.

I call myself a Wild Soul Woman who listens to the wisdom within; my intuition and instincts. This is where my power lies. Maybe this isn’t the mainstream way of thinking and believing. But this is my truth.

The Witch was feared because she ( and sometimes he) lived “outside” the natural order. They represented a different way of living that challenged the status quo. Self-contained and self-possessed, they were a threat that could not be explained  and had to be eliminated.

Unfortunately, witch hunts still happen today in such places as Africa and India where old women are killed on the mere accusation of being a witch.  It saddens me that women who know their own power and worth and self-determine their lives, are persecuted and destroyed.

I’m hoping that my time at Shifting Loyalties will clarify my thoughts and feelings around this realisation at the same time as strengthening my voice in speaking out. ‘shifting loyalties is another beginning…’

This is weird right! Or it is just meant to be?! I’ve just competed my first 3 card spread in the new home. I was asking the questions: who was I/ am I/ will be.
This spread is nearly identical to a recent reading I had with the lovely @rootandrattlesnake regarding my business. The only difference is the middle card.
The cards are telling me something and I am listening.
My old self has gone. The Sheree of many years giving to please everyone and needing outward success and other people’s approval has gone.
The woman standing here now is artistic and introspective with a dark intensity which I claim and nurture.
Those four wands waving at me again signify a completion. In business I saw it as Iceland – The Retreat coming to fruition watch @livingwildstudios
As a person, I see this as all my hard work from reaching rock bottom, from stripping away all the shit and facades in order to see and accept authentic me will pay off/ is paying off each day as I continue on this path, as I become complete – whole. 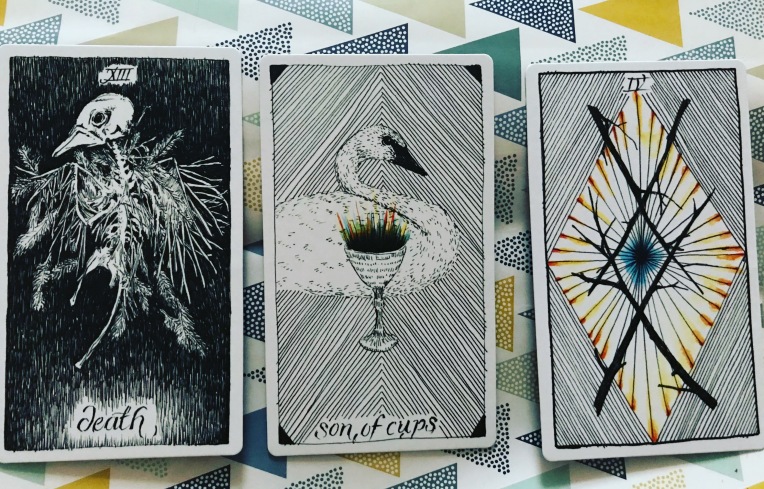